The Comfort of Knowing Your Neighbors 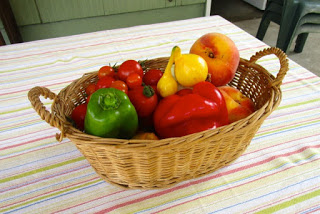 The doorbell doesn’t ring often at our house. “Dropping in” doesn’t happen much anymore, so it’s a nice surprise when it does. It’s Sunday afternoon, and I’m in the kitchen with the fridge open, mentally sorting out leftovers for dinner. Ding… Dong… Standing on the porch in front of me is my neighbor holding this fabulous little basket of produce from her garden. Not a big deal, it’s just food, right? Oh no. In my mind it meant someone was thinking of us today. It might even be an “I like you” gift. (And a guest offering peaches as big and juicy as these might really be my very best friend.) The array was so beautiful that I had to think twice before taking that fat old peach out to slice and savor.
I’m sure Jennifer had no idea how delighted we’d be. After all, if you have a large vegetable garden this collection is a mere drop in the basket. However, that she took the time to put it together for us meant a lot.
I found that sharing anything, whether it’s veggies, a pot of soup, or a batch of brownies is a good way to reach out to neighbors. Thoughtful gestures —no matter how small — might not be a big deal to the giver, but could mean a lot to the givee. They don’t always tell you how much they appreciate it, but the important part is letting them know you’re thinking about them. I think fondly of people I know all the time, but seldom take the time to let them know. (I usually do make contact with someone who showed up in a vivid dream the night before. Just in case it means something important to them.)
I’ll never forget the week we moved from to our first home in the country. My parents drove up to help us unpack and the six of us were sitting around the table having dinner. Knock Knock, then a vision of warmth walked in the back door. I say “vision” because we’d lived in San Francisco suburbia all our lives, and we were over-the-top excited to leave that cement behind. Here stood a neighbor from up the street with a large basket hanging from her arm. “Welcome to the neighborhood” she said. Here was a woman my age, in braids, offering us homemade blueberry muffins, a dozen eggs from their very own hens, and fresh bacon from the hogs they had raised. People have their own pigs? What? Now this was a “welcome to the neighbor” in spades. Turns out they were very excited that their new neighbors had two children the same ages as their own. Happily, we eventually became best of friends, and my son and their eldest boy became best buds. Great adventures there, great memories. Including a few involving a certain brown and white cow!
For that secure feeling, it’s always been comforting for me to form some kind of relationship with people who live close by. It takes the stress out of being the new guy, and you never know when a neighbor will need a neighbor. Or, when a new friendship will bloom.